What lies behind Ultra Violet, the Pantone colour for 2018

Like it or not, the colour purple will figure greatly in your future. And it won’t be any old shade, but rather ultra violet with the serial number 18-3838: deep, intense, mystical and bold. Superstitious and conventional people should steer clear, the Pantone colour for 2018 calls for you to be daring.

It might remind some people of Lent, and others of clairvoyants or at best the album cover of the iconic Purple Rain by Prince. According to the Pantone Color Institute, which has chosen it for the next 12 months, it’s so much more:

it’s a complex and contemplative shade that will show us the way forward.

Purple is an equivocal colour which doesn’t have a clear gender, because it mixes two contrasting colours, red and blue. It’s mysterious because it’s at the end of the colour spectrum, separating the visible from the invisible: the last shade that can be perceived by the human eye, beyond which the ultraviolet colour range begins.

After having encouraged us to innovate with the vibrant Greenery, the Pantone colour for 2017, what led to such an eccentric choice? In the words of Leatrice Eiseman, the executive director of the Pantone Color Insititute, in difficult times, such as the ones we live in, we need a complex colour.

Ultra Violet brings to mind the immense night sky, the secrets of the universe and the excitement of future discoveries. This colour is intrinsically linked to the artistic flair of several musical icons who have worn it and made it the anthem of a generation, like Jimi Hendrix with Purple Haze. And it inspires us to be more spiritual.

Ultra Violet encourages people to think of what special mark they can leave on the world, and to find some rest from the frenzy of everyday life.

A step back: what are the Pantone colours?

As you might have guessed, the Pantone colour is neither a simple trend, nor basic advice for brands and designers. To use Laurie Pressman’s words, the vice president of the Pantone Color Institute, it’s a genuine reflection on what our world needs today.

To understand its importance we have to go back to the ‘50s, when the American graphics firm Pantone Inc. invented the colour chart that would soon make the brand a worldwide phenomenon. This system simplifies four-colour printing (CMYK) because each colour corresponds to a unique serial number.

Every December from the year 2000 onwards, Pantone has duly indicated the colour for the following year, and this serves as an inspiration for the worlds of fashion, beauty and design for the next 12 months. The colour is chosen by the Pantone Color Institute, a group of experts in the language of colour who consult, year in year out, with different brands and manufacturers. The final choice results from a careful analysis of the year’s cultural scene, technology, food, fashion and even international politics: this is how the Pantone colour becomes the visual expression of a global feeling, breaking the boundaries of the close-knit circle of professionals in the field.

For 2017, Pantone chose Greenery, a bright green jazzed up with a splash of yellow; this colour urges you to rediscover nature as you seek solace in this difficult social and political climate. 2016 was the turn of Rose Quartz and Serenity blue, two pastel tones meant to fill you with inner peace.

This year, the American titan has gone with a futuristic shade that tries to put everything back together again as well as serving as a spur to individual creativity. But have you ever asked yourself where the colour purple comes from?

Think of Phil Collins’ drums, that muffled sound that makes you think right away of the ‘80s, though as a matter of fact it marked an entire decade. It wasn’t planned, did you know that? You are bound to ask yourself what the Genesis have in common with the colour purple? Easy said: purple is a sign of serendipity too. It was traditionally worn by the aristocracy and the royal family to signify power and riches, and do you know why?

The colour purple was extracted in classical times from the mucous membrane of sea snails from Lebanon. A great many snails were needed to produce the tiniest amount of purple, and therefore dyed garments were extremely expensive. This story will undoubtedly infuriate all the ecologists, and we’re lucky that the practice didn’t cause the extinction of the unfortunate molluscs.

As well as being expensive, from the times of Julius Caesar a multitude of laws regulated who could wear purple. In fact, Julius Caesar himself fell in love with the colour after seeing it on Cleopatra, and, from then on, claimed the exclusive right to wear it. The story goes that even Queen Elisabeth I would not allow anyone outside the royal family to wear purple clothing.

1856 represents a turning point: in London, the young chemistry student called William Henry Perkin discovered by chance that you could extract a dark and slimy material from tar, which could in turn be used to colour fabrics a bright purple. In his small lab at home, this eighteen year old was trying to synthesize an affordable alternative to quinine, an organic compound used at the time to treat malaria. His work was for a noble cause, but it failed. On the other hand, this discovery made him extremely rich: he produced the first artificial dye, in a period when purple was terribly en vogue.

It’s for you, if you’re creative

Are you a sci-fi enthusiast? Then Ultra Violet will make you think of Kurt Wimmer’s film with the enchanting Milla Jovovich as his leading lady. Or the lightsaber used by Samuel L. Jackson in his role as the fearsome jedi Mace Windu of Star Wars. Pantone too has links with the fantasy world, referencing Jimi Hendrix: do you remember his Purple Haze? The story goes that the words were inspired by Philip José Farmer’s novel Night of Light, published in Italy as a part of the Galassia series (a serious throwback for the vintage lover).

For that American brand, this provocative colour is a clear invite to break with convention as did Frank Lloyd Wright or Wagner, who surrounded themselves with purple in order to feel more creative. Or Prince, who turned purple into an anthem, a dress code and a colour fetish. A symbol, perhaps, of his androgyny. What it meant for him is still a mystery. We’re left with a forgettable film with an award-winning soundtrack.

The Pantone Colour for 2018 is political

Think about it. Ultra Violet is red and blue combined: the two colours which traditionally stand for left and right-wing political parties. Considering the delicate American political climate, Pantone, with this choice, is auguring a less polarized year.

Purple is a bipartisan colour, it speaks to all parties: what about the Popolo Viola (lit. the purple people) in Italy? Looking outside our own country, it’s not by chance that Hilary Clinton chose to wear purple for her concession speech, or that Michelle Obama wore a purple sheath dress when she met Melania Trump.

Going back in time, purple was the colour of the suffragettes, then it became part of the LGBT movement, as a nod to a more genderless approach.

When I’m out of blue, I use red

As Pablo Picasso used to say. But better to mix them. 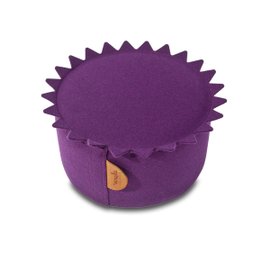 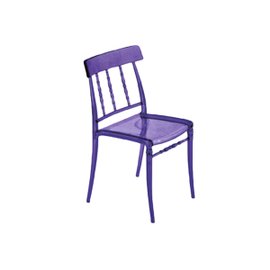 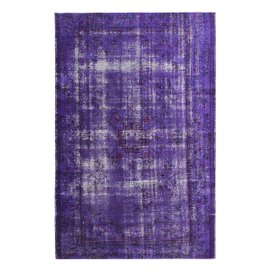 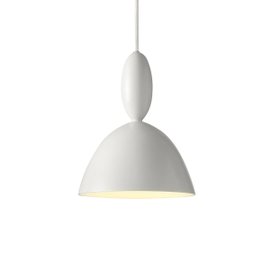 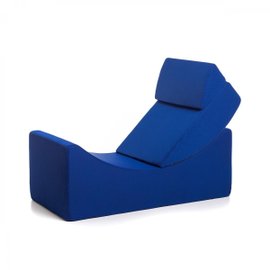 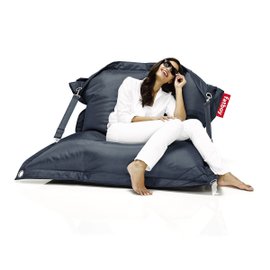 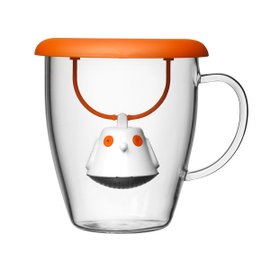 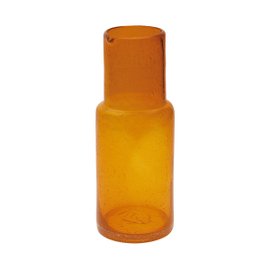 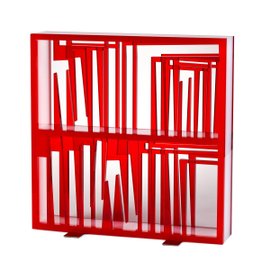 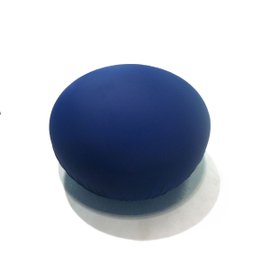 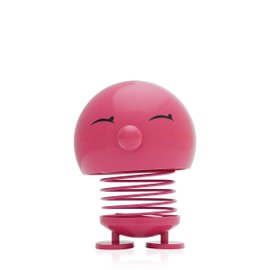 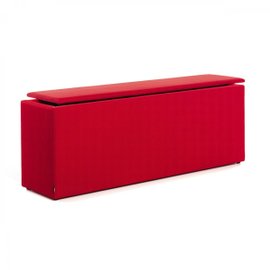 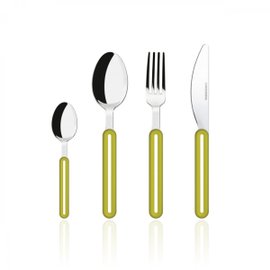 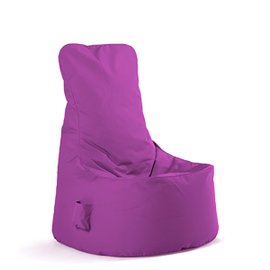 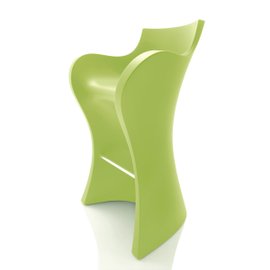 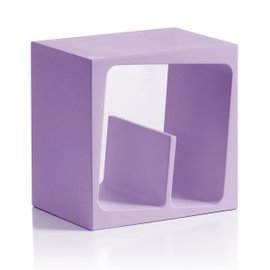 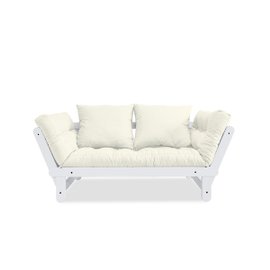 Next
Design tales to be read alone or in company