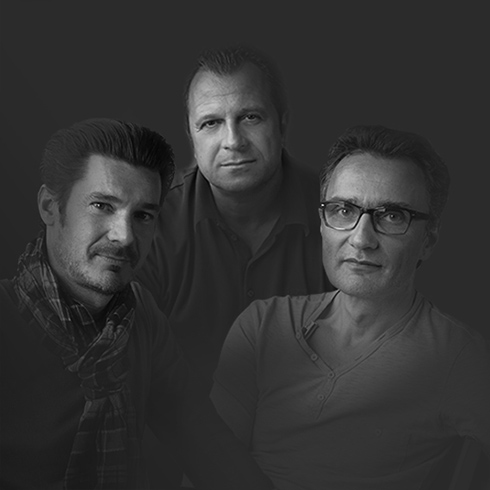 Atelier Oï saw the day in 1991, founded by Aurel Aebi, Armand Louis and Patrick Reymond at La Neuveville in Switzerland. From the beginning of their collaboration, they aspire to erase the genres to underline the transversality of the disciplines. Their work, internationally, varies between architecture, interior design, design and scenography. Multidisciplinary, team spirit and close relationship with matter are at the heart of their creative philosophy. Experimentation defines a fundamental feature of the atelier or here the realization is often generated by an intuitive and emotional report in the processing of the various materials. Their projects have been rewarded throughout the world (graduates of Europan 3 - 1994, European Museum Award of the Year - 2001, If ​​Design Award - 2012, Living at Home Award - 2007, Product of the Year, Architectural Record - 2008, Long Time Design - 2013, Innovationspreis für Architektur + Technik a Light + Building - 2014, Winner Iconic Awards 2014, D'S Bronze Award 2014). Through experimentation, cultural exchanges and events dedicated to their creations, sign up for B & B Italia, Bvlgari, Driade, Foscarini, Moroso, Pringle of Scotland, Röthlisberger, USM, Victorinox and Louis Vuitton.
Filter
Price low to high
Price high to low