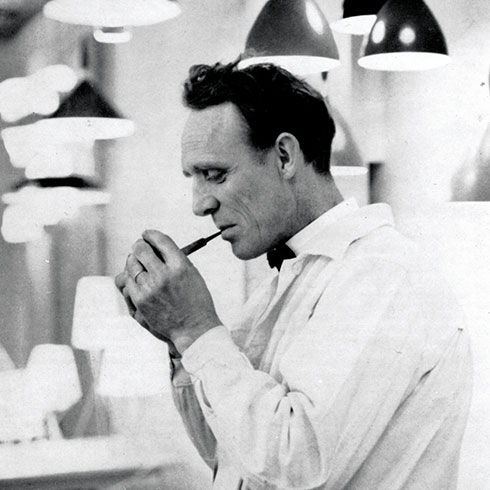 Award-winning designer Birger Dahl (1916 – 1998) was a pioneer of contemporary Scandinavian lighting. The mid-century years were a formative period of his work, when he forged his signature streamlined style and launched a new vision of lighting design. Dahl's career had actually begun the previous decade, when he became head of design at Norwegian electronics firm Sønnico and created the award-winning Dokka pendant lamp. Dokka was the first lamp in Norway to receive a Golden Medal award at the prestigious Triennale di Milano, which brought Norwegian lighting under the international spotlight. While acclaimed for his lighting designs, Dahl is also considered to be one of Norway's leading Post-war interior architects. Strict geometric shapes, such as circles, cones and cylinders, were the building blocks of Dahl's design vocabulary, which he softened with gentle contours. He emphasised the purity of form, highlighting the shape of the object rather than hiding it behind decorative details or layers of ornamentation. Sensibilities like these explain why his work still appears modern today, and why lighting designs such as Dokka and Birdy are so compatible with the interiors of our time.
Filter
Price low to high
Price high to low