FontanaArte, a catalogue of icons

This brand brings to mind a burst of creativity, a juxtaposition of different glass transparencies. The perfect name for the artistic division of a glass manufacturer that won great acclaim throughout the twentieth century.

What’s in the name FontanaArte?

It’s unfortunate that it was all a coincidence - though a happy one.

A source of timeless ideas

Founded in 1881 in Milan, the firm Luigi Fontana made glass plates for the construction industry. In the early twentieth century, the company started manufacturing top-end furniture – one-of-a-kind pieces made upon request – made primarily out of glass.

At the beginning of the thirties, Gio Ponti took over the artistic management of this production line. The King Midas of the design industry didn’t waste time: in 1931 he turned a sphere, the primary shape par excellence, into the iconic 0024 lamp.

In the same year he designed Bilia, which didn’t appear on the market until later. Bilia = reversed cone + sphere: this simple equation illustrates how design, through volume and matter, creates an icon destined to last for ever. If you take into consideration the work of contemporary lighting designer Michael Anastassiades, Bilia might have been designed only yesterday, today even. 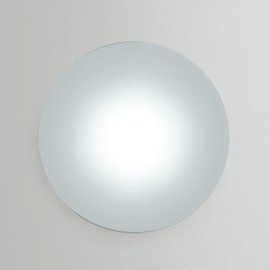 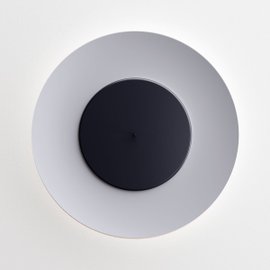 Now, imagine if at some point a star-studded designer starts to give more play to a minor division of a firm, which in turn starts to gain critical acclaim and later the attention of the market. Maybe we should give him the company’s main line: glass manufacture.

Thanks to his technical expertise, the master glassmaker Pietro Chiesa, with the assistance of his team of craftsmen and a very special oven – the only one in Italy – was the man responsible for restoring glass manufacture to the forefront of Luigi Fontana. The brand distanced itself more and more from mass-production and rapidly, its new-found craftsmanship character became more artistic.

We’re still in the early thirties and FontanaArte has already seen a steady flow of pieces that will play a crucial role in design history. The Fontana coffee table, for example, and the Luminator floor lamp, the Cartoccio vase, the Tavolino 1932, the 006 candle holder…

In 1954, the famous French master glassmaker and decorator Max Ingrad took over as the artistic director of FontanaArte. The interior design scene was going through a deep change: thanks to the economic boom a vaster and more diverse swathe of population was developing an interest in it. The entire industry was moving from the limited production of one-off pieces to mass-production, from craftsmanship to manufacture. Max Ingrand was responsible for guiding FontanaArte through this change: he helped the company reach mass-production, but as he did so, he preserved the craftsmen’s attention to detail and their artistic flair.

To confirm this, Fontana: the table lamp that represents FontanaArte the most, its iconic piece, could almost be considered its logo, perhaps even the logo of the whole lighting design industry. A refined body in white blown glass with an elegant satin finish: a truncated cone supported by a gently tapered sphere.

It’s the classic silhouette of a lamp with its shade, the abat-jour par excellence.

Ponti and Chiesa turned glass into art and Ingrand conveyed this success towards large-scale production, but it’s Gae Aulenti who, from 1979, escorted the company into the era of the service industry, a time when communication is as important as industrial production.

Beside the collaboration of top designers – not forgetting Gae Aulenti herself –, she managed to put together a team of young professionals to work on product development, graphics, events and FontanaArte’s overall communication strategy.

FontanaArte’s new symbolism runs through its products too. Drawing on Duchamp, Gae Aulenti replaced the wooden top of a utilitarian trolley with a thick sheet of cut glass – representative of the brand’s history – and retained the free motion wheel typical of industrial design.

This is how, in 1980, Tavolo con Ruote was born. Seven years later, Parola, the table lamp designed by Gae Aulenti and Piero Castiglioni, opened wide its anthropomorphic jaws. 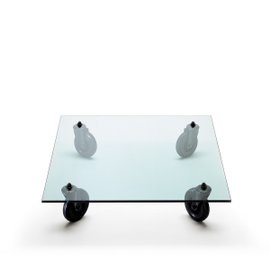 Throughout the years and by strategically scouting for new talents, Gae Aulenti managed to bring to FontanaArte many international designers, architects and artists, such as David Chipperfield, Vico Magistretti, Steven Holl, Norman Foster, Alvaro Siza and Renzo Piano.

On the one hand, this association feels like a traditional Italian artisan’s studio which relies on bringing different skills together but, on the other, it expresses a unique aptitude for innovation, typical of Italian design. Gae Aulenti’s collaborative approach was passed down by the artistic directors who succeeded her at FontanaArte until 2013, a year in which it was relaunched in a striking way.

The job of researching and developing unconventional materials, on FontanaArte’s behalf, is entrusted to a new generation of Italian and international designers, who nonetheless are free to leave their individual imprint on the designs. So we have Blom, designed by Andreas Engesvik, winner of the Red Dot Award, Volée by Fioravanti which switches on as if it were struck by a tennis player, Cheshire by Gam Fratesi with its distinctive cap in opal polycarbonate.

A constant burst of creativity

FontanaArte is currently at the MoMA and at the Triennale, it has flagship-stores in Milan, London and New York.

As if it were steered by the infallible insight of its founding members, FontanaArte doesn’t miss a shot even when it comes to fields that aren’t in its usual compass: in 2016, thanks to a restyling of the company’s website, FontanaArte won the Interactive Key Award – one of the most important awards in the view of the Italian digital community – for the Beauty, Fashion, Luxury category.

Glass: the real light of a beautiful home

But it is in glass, thanks to glass and through glass that FontanaArte achieves distinction.

After presenting a diverse range of materials in the latest collections, FontanaArte has currently set a plan in motion that will once again place glass at the forefront of the company’s production. Glass represents continuity between the past and the future, but above all it is an emblem of FontanaArte’s philosophy: the real light of a beautiful home. 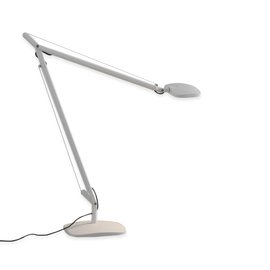 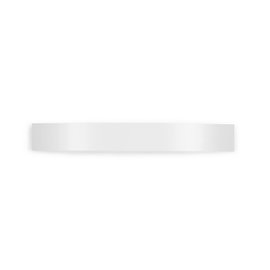 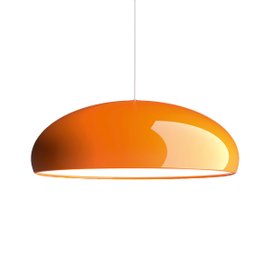