Taccia: the future of LED goes back to its origins

Flos has always been able to find the balance on the thin thread that divides (or connects?) the loyalty to classic design and the need for innovation, the deeply rooted identity and the natural change that allows to create fresh, original and never outdated products.

The Milan Fuorisalone 2016 has brought many news in the Flos company. Some of them are already on LOVEThESIGN, ready to decorate and illuminate the home of anyone who loves the most innovative design...with a retro touch.

A tiny neoclassical column with regular grooves. A translucent bell jar on the top, in an apparently precarious balance. The design of Taccia is a masterpiece of traditional shapes revisited in an ultra-modern key. Like many other masterpieces generated by the genius of Achille Castiglioni, sixty years after its birth this object keeps creating strong emotions and being more modern than ever.

The secret to be always up-to-date is explained in the famous sentence from The Leopard: “For things to remain the same, everything must change.” And in fact, Taccia remains basically the same, but it also takes some significant steps towards a full contemporaneity of functions, by innovating the light source (which is now LED) and the material of the bell jar (which is no longer blown glass but metacrylate).

This latter change is actually a return to roots: in fact, as we can read in the precious historic material coming from the archive of the Fondazione Achille Castiglioni, the brothers Achille and Pier Giacomo Castiglioni had designed the first Taccia table lamp (1958) with the characteristic reflector made of transparent plastic, not glass. In the end the idea was abandoned because of the deformations caused by the heat coming from the incandescent light source. The prototype was then developed and produced by Flos in 1962 with the famous and majestic blown-glass bell jar.

This is what Achille Castiglioni said on this subject:
“I have to admit - and I even like to say it - that this lamp was designed in a wrong way at first. The Flos company didn't exist yet, and we had designed this object [...] with some transparent plastic materials [...]. But when we first tried it, we noticed that the plastic material became flat due to the heat generated by the light source: the project was completely wrong.
That's how we decided to use blown glass instead of plastic for the reflector of Taccia. This is the design of the final project.
And you must know that the doric column-shaped support is meant to cool down that sort of burner. That heat generated by this light source is so strong that we needed something to cool it down, like the little wings of a scooter.”
(Lesson by Achille Castiglioni, Florence, 1986) 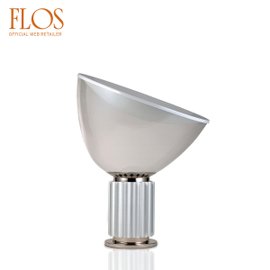 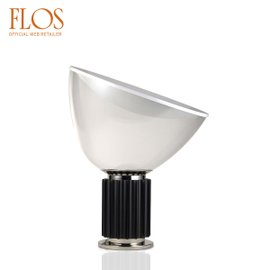 Today, the energy efficiency of the LED and the availability of new plastic materials make it possible to go beyond the limits of the past: the light source produces less heat and the plastic doesn't change its shape, maintaining its beauty perfectly intact. Castiglioni would be proud of it! The ribbed column loses its structural raison d'’être (working as a cooling chamber for the heat produced by the light bulb) and becomes a decorative element. The new Taccia also has a dimmer to regulate the intensity of light.

The “copernican revolution” of the material is not the only news of 2016: Taccia - famous for its majestic size that makes it suitable either as table or floor lamp - is today available in a Small version, identical to the original lamp ot 1962. An identical miniature of the full-size object. Taccia LED Small is conceived to be easily placed on smaller desks and tabletops.

Taccia: the evolution of an idea

From intuition to design, from the project to the prototype, from the production to the upgrade: fifty-eight years of history make Taccia a true design icon of the 20th century, which today more than ever is projected towards the future.

December 1958: After several studies they realize a prototype with a matt-white plastic reflector and a support cup, also in transparent plastic.

1960-61: After several tests they have to exclude the use of plastic because it's deformed by the heat produced by the incandescent light bulb.

March 1962: Flos (still based in Merano) commits to the realization of a final prototype and the production of the lamp. The final prototype is composed of: an aluminium white lacquered reflector with a matt convex side and a shiny concave side + A support cup in heat resistant transparent glass. 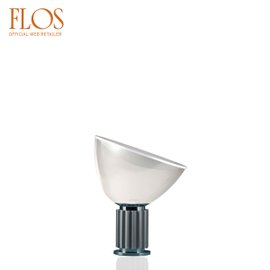 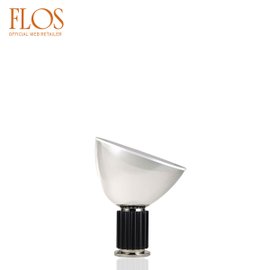 2010: Flos tries to find a way to replace the original light source (an incandescent light bulb) with a new remote-phosphor LED light, and it presents Taccia LED. It is one of the first cases of a successful technological upgrade of a historic design icon in the lighting sector.

2016: the PMMA (Polymethyl methacrylate) is tested to be used in the production of the support cup that, thanks to the use of a COB LED source and some innovative technologies in the processing of plastic, turns out to be completely heatproof. The new version of Taccia sticks to the original 1958 model and it is presented at the 55th edition of Milan Furniture Fair.

Next
The empathic home: hi-tech well-being