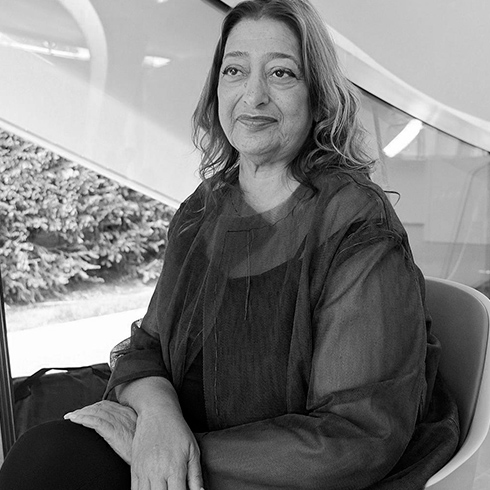 In 1972 Zaha Hadid undertook architecture studies at the Architectural Association, where he received the Diploma Prize in 1977. He is the founder of Zaha Hadid Architects and is internationally known for his academic and theoretical work. Each of its dynamic and innovative projects is based on over thirty years of revolutionary exploration and research in urban planning, architecture and design. Hadid is interested in the rigorous interface between architecture, landscape and geology, since its activity integrates natural topography and human-made systems, up to experimentation with cutting-edge technologies. This process often results in unexpected and dynamic architectural forms. Hadid became a partner of the Office for Metropolitan Architecture (OMA) and was a lecturer at the Architectural Association with the collaborators OMA Rem Koolhaas and Elia Zenghelis, then running a studio at the AA until 1987. She is currently a lecturer at the University of the Vienna Applied Arts and was a Visting Professor at Yale University, New Haven, Connecticut. Zaha Hadid was awarded the Pritzker Architecture Prize (considered the Nobel Prize for architecture) in 2004. Over the last 30 years his works have been the subject of critically acclaimed retrospectives. Hadid's important contribution to architecture continues to be recognized by the most authoritative international institutions. In 2010 she was included by TIME magazine in the list of the 100 most influential people in the world in the thinkers category. Zaha Hadid is currently involved in a variety of projects around the world.
Filter
Price low to high
Price high to low