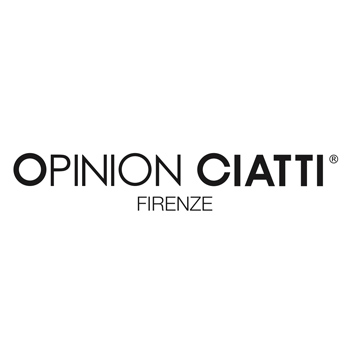 The Ciatti family has been managing the company that bears its name ever since the Fifties. Headed by Flavia Ciatti, the company cooperates with established international designers in creating iconic products - such as the Ptolomeo shelving series, the company's best seller. For Ptolomeo designer Bruno Rainaldi was awarded the Compasso d'Oro in 2004.
Filter
Price low to high
Price high to low

Any doubts or questions?Contact us!

Since the 50's the family Ciatti has managed the company that bears its name. Under the direction of Flavia Ciatti, the company started cooperation with several internationally renowned designers which created important pieces such as Ptolemy which became the company's bestseller. For this project, Bruno Rainaldi was awarded the "Golden Compass 2004".

The Opinon Ciatti was founded in 2006, by a representative of the family Ciatti: Lapo, and the designer Bruno Rainaldi who already worked with the family business founded in 1950. From this union creations were born, shaped according to ideas and unique artistic streams that have made this company one of the largest in Italy and beyond. In 2011, with the disappearance of Bruno Rainaldi, the artistic director and the Ciatti company is under the wise guidance Lapo Ciatti .

Born in 1952, he soon began to devote himself to contemporary design, collaborating with the likes of Maddalena De Padova. Later he formed part of the Baleri & Associates with which he carried on the business of the study of communication strategies on behalf of design firms. After he founded Studio Rari and worked with many companies, he entered into the amazing partnership with the Ciatti family that led him to create the Ptolemy library, which was a great success. The thread that links all of his creations, is the freedom and ease of use, a philosophy which he never abandoned until 2011 when the designer died prematurely.

The initial production of the company, in fact, focused on bar furniture bar like radio and record player, but changed the production lines in the years before the introduction of the furniture that served as support for televisions and then introduced on the market, the first line of computer furniture in 1985. The company, thanks to the products designed by Bruno Rainaldi in collaboration with other Italian designers, creates lines of furniture, seating, mirrors and objects that soon became very popular and well known in the furniture industry. The passion for furniture is manifested in expressive choices that are applied to everyday objects, but seen in a different light.

The path taken by Opinion Ciatti is facing throughout the home, with unique and strong expressive character. The company's philosophy is to create objects that can be distinguished by a unique shape and innovative and that are able to perform at their best but their function. The company's tradition has its roots in the Italian tradition, but with the inclusion of new elements and showing a definitely more modern design.

The special design of objects, shapes and materials has made it possible to create unique items that have a strong visual impact. The products of Opinion Ciatti are innovative, feature geometries and have a minimalist style, but are absolutely rich and very functional because the design does not have to be representative only of beauty, but it must have features of high utility. The company has as main purpose the pursuit of quality of its products, but also tries to keep prices down to be able to be more competitive on the market. The packaging is specially designed to show a direct communication to the customer.