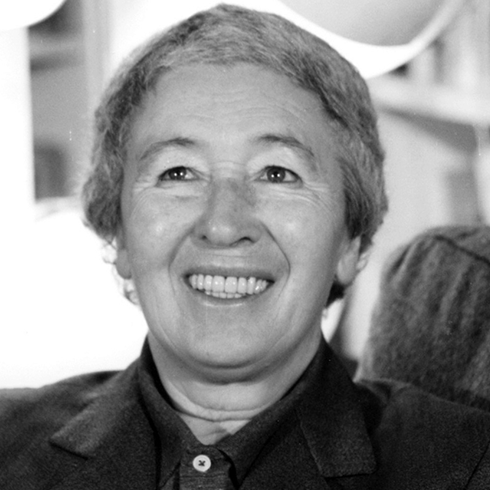 She graduated from Milan Polytechnic in 1953 and since 1956 has worked in the city designing for architecture, interiors and industry and theatre scenery.In the early eighties she was the artistic director at FontanaArte, creating timeless lamps and furnishing elements for the company that are still in the catalogue. In particular: the Giova lamp (1964), Tavolo con ruote table (1980) and Tour table (1993). Together with Piero Castiglioni he designed: the Parola family of lamps (1980), wall lamps Diamante (1986) and Calle (1988), and the Diastema spot light (1994).Her architectonic projects are many and prestigious and include: refurbishment and a new layout for the Musée d‘Orsay (1980-86) and the Musée National d'Art Moderne at the Centre Pompidou (1982-85); refurbishment of Palazzo Grassi in Venice (1985-86); the new entrance for Santa Maria Novella station in Florence (1990); Palazzo Italia at EXPO ‘92 in Seville; restoration of the Scuderie Papali at the Quirinale in Rome (1999); renovation of Piazzale Cadorna in Milan (2000); the "Museo" and "Dante" stations on underground line 1 and redesign of Piazza Cavour and Piazza Dante in Naples (1999-2002); the new Asian Art Museum in San Francisco (1996-2003); the Catalan Museum of Art in Barcelona (1985-2004); restoration of the Palavela in Turin for the Winter Olympic Games in 2006; the institute of culture in Tokyo (2006); restoration of Palazzo Branciforte in Palermo and transformation into a museum (2011).She received many prizes and awards, including: "Chevalier de la Légion d'Honneur" (Paris), Honorary Member of the American Institute of Architects – Hon. FAIA; Praemium Imperiale for Architecture (Tokyo), "Knight Grand Cross" of the Order of Merit of the Italian Republic (Rome), honorary degree in the Fine Arts from the Rhode Island School of Design (Providence, USA).
Filter
Price low to high
Price high to low

Any doubts or questions?Contact us!